21 years old opening batsman of Hyderabad, Tanmay Agarwal was immediately taken to the hospital after being hit on the helmet during fielding on Wednesday. On the 3rd day of Ranji Trophy clash between Hyderabad and Chhattisgarh which is being played in Valsad.

He laid on the floor straightway but was conscious. On field umpire ran towards him & he complained about dizziness. Team doctor rushed to the field & checked him. Then he was taken to the hospital. But soon he left the hospital to take further parts in the match. 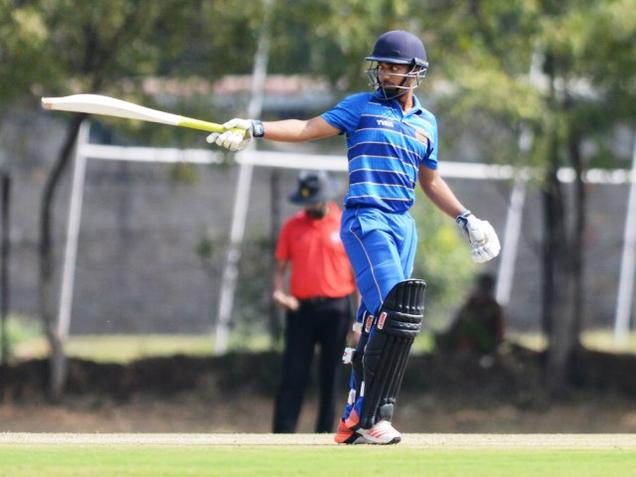 In the first innings of the match, the young opener scored 39 off 124 balls and helped his team to post a total of 351. He & his team’s captain S Badrinath made a solid partnership of 120 run & stayed in the crease more than 40 overs after the early wicket of Akshath Reddy. Agarwal departs after his 39. Later the skipper & former Chennai Super Kings player Badrinath scored a brilliant century. In reply, Chhattisgarh was packed within 188.

Tanamy was injured during Chhattisgarh’s first innings & was taken to the hospital. Then hem came back & didn’t open in 2nd innings. He came to bat at number 5, in the second innings but couldn’t score a single run as he departs for a five ball duck. His team Hyderabad faces batting collapse in the 2nd innings but still in a good position because of their mammoth 163 runs lead in the first innings.

The young prospect made his First Class debut in 2014 for Hyderabad against Goa. Since then he has played in 18 first class match. He has a healthy average just below 40. Tanmay already has scored four tons & four half centuries in first class with a highest of 135. The young opener has a good record in List A. His List A average is above 50, which is quite impressive. Agarwal scored 2 hundreds in his List A career with a best of 136. He has also a handsome strike rate, which is more than 92 in the domestic one day competitions.

Doesn’t matter whoever wins the match, the main fact is, Tanmay Agarwal is all okay now & not much damage was done to him after being involved in that awkward hit.