Real Madrid manager Zinedine Zidane applauded match winner Cristiano Ronaldo as the forward scored both the goals for Real on their 2-1 victory against Sporting Gijon at home. Real Madrid strongly settled themselves to the top of the La Liga with this victory. Ronaldo bagged both goals just a week later of his Hat-trick against Atletico in the Madrid Derby.

Zidane hails the Portuguese & says that the forward can score at any moment. Zidane appreciated the 3 times Ballon d’Or who has come under criticism early this season for the poor run of his form. The French legend thinks that the winger is fully fit & raring to go.

The Real Madrid boss continues to speak, “When he doesn’t score goals everyone thinks he is not playing well. Today he scored twice and worked hard, down the wings and in the middle. He is fully recovered.” 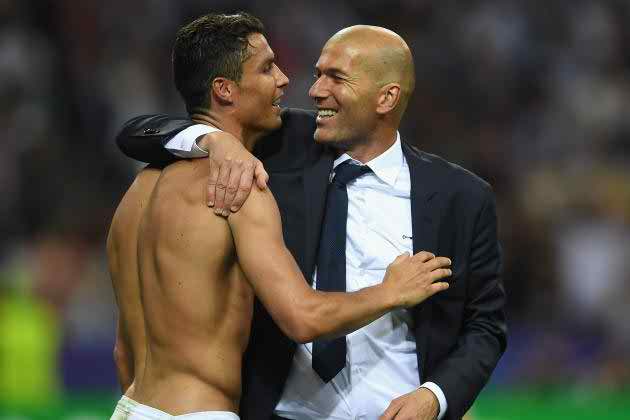 Current director of Real Madrid, Emilio Butragueno described the second goal as magisterial. According to the former striker, the header which was converted into the 2nd goal for the hosts, was a sensational one & quite like a hammer. The director adds that Cristiano was decisive once again & it is his privilege to be able to count on a player like him.

The victory pulled the Galacticos’ unbeaten run to 31 games & equalled the mark which was made by former manager Carlo Ancelotti. Los Blancos are yet to concede a defeat in the La Liga this season. The Madridistas have got 33 points from the first 13 La Liga games & also confirmed the round of last 16 in the UCL.

The highest goal scorer in the Real Madrid history, gave the Galacticos the lead in the 5th minute from a spot kick. He doubled the lead on the 18th minute. On the 35th minute Carmona scored the only goal for Gijon. The second half was goalless but Gijon could have gone home with one point but Duje Cop missed the best opportunity of the game as he missed a penalty which he had hit over the post with less than 15 minutes to play of the normal time.

In the post-match press conference Zinedine Zidane faced the media & revealed his opinions & indiacted that he was not happy with the display of his team. He said that he was annoyed beacuse nothing went to the way as he would like it to be. But he also expressed his happiness because of getting the full 3 points from the match & also for the top position at La Liga points table.