Zinedine Zidane, became the FIFA Coach of the year.  The France man become the team who boost the team to  win the Champions League title for the second time. Along with that he embarked as the FIFA World Cup coach of the year 2017. Actually it became the biggest challenge and the Real boss obtained the award in his name this season.

The vastest show, “Best FIFA Football Award” has been held in London’s, Palladium Theater on Monday at the local time evening. On the function the great award has been given to the French man for his outstanding performance. 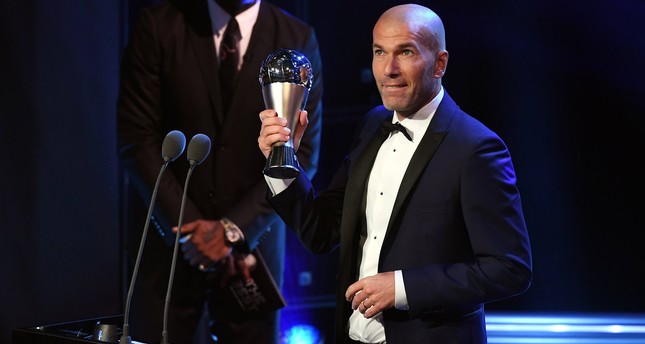 However, To award the best contribution to football throughout the year, the fair was held on Monday evening in London’s Palladium Theater. Along with legendary Diego Maradona with Lionel Messi, Cristiano Ronaldo, Neymar and also the biggest star were presented in the function. It was fair of star.

The national team’s coach, captain, FIFA elected journalist around the world made the man FIFA coach of the year. This year he really worthy of this award. The team Real Madrid show off their performance and their outstanding performance really mind-blowing. Along with the boss their star forward Cristiano Ronaldo get the Best player of the year.

Zidane being a very talented guy so far. This season, the French coach boost the side to win four titles. Under him, the club won the Champions League, first time grabbed La Liga title in five years. In December last year, his team obtained FIFA Club World Cup titles. This clearly indicate his ability with the club.

In 2008 the legend retired from the football career. After that he prepared himself and appointed as the club as the advisor, where he played once. In 2014 he appointed as head coach of B team.

However, January 2016 after eliminating  Rafael Benitez, the 45 years old man take over the place. In the year 2016 he took the club responsibility by signing a two and half year contract deal. After joining the side he proved himself nicely. Under his guidance the team get return their past speed and final result became the front of us. They won the La Liga title this season. For his hard work he really worthy of this honor.