NFL becomes the National Football of America being an American Football competition. It being one of the most popular sporting event in America and also in world-wide. By the passing the time speed it’s the time of 6 week clash which has started 11th October and the round of NFL 6 week will be finished on 15th October so far. Miami Dolphins vs Chicago Bears clash will be played on 14th October Sunday. The live game will be broadcast on Eurosport and FOX Sports. World wide NFL fans eagerly waiting for the match. 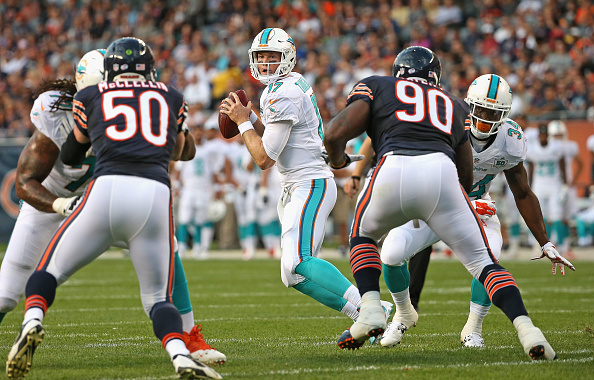 The Chicago Bears going to start the 6 week with top flight of confidence. They are very aggressive in their aim and however they just win the game. We have seen their aggressive look in the last game against Tampa Bay where they have won over 48-10 score. It was great achievement such a difference score. After the 5 week clash their confidence level rise very high. And Mitch Trubisky played just awesome. In the last outing he has thrown 945 yards along with 3 interceptions and 8 touchdowns. And how can we forget about Jordan Howard who leads the Chicago by 203 rushing yards. By receiving 217 yards corps Allen Robinson II has lead the Bears. Taylor Gabriel also shown height reception in this year. He received 22 attack and it was really awesome. The Defense also very tight of the side along with Khalil Mack who leads the Bears by 5 through in his 1st four games.Danny Trevathan, Eddie Jackson also played very well. They won three clash in their last five and they has been continuously winning from last three match. That’s are awesome.

The Miami Dolphins who had loss their two match are trying to come back as soon as possible. Their target to overcome the previous losses. However they want to won the match. Against Cincinnati Bengals they lost by 17-27 difference. They have to overcome the condition. There have nothing to disappoint as the team has some good quality of roster and thy have the ability to change the game of Dolphins. Ryan Tannehill in a great form and he leads the side by 972 yards of passing. There is not end of his skill, he also completing 65.9% task to finished 8 touchdowns along with 5 interceptions. On the side, Frank Gore also leads the team with 202 Yards of rushing. And Kenny Stills leads the Dolphins with 241 Yards of receiving. The two great reactions are Albert Wilson and Kenyan Drake who has 17 reception and it become the high reception of the side.

Prediction: Chicago Bears will win the match with 27-18 differences.