Success isn’t given. It’s earned with hardship; integrity and sweat that makes us better every minute. Athletes are the best illustration of such context of winning the world. Nevertheless it’s not only a big race of who make and break records in the stadiums, it is also a buzzer game of who earns most outside of the tracks. It is not any racial game. Howbeit it’s nothing but an open secret competition. 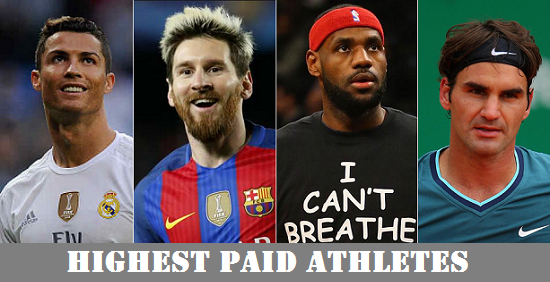 This listing is on the basis of yearly salary & endorsement deal. Net worth is different thing where the all time best boxer Floyd Mayweather standing on top position.

In conformity with Forbes, all the highest paid athletes are the rockers in the game zone and many of them are continuing their role of Billionaires Club for years in a row. Forbes told that the number one youngest highest paid player is American golfer Jordan Spieth, the oldest one is another American golfer Phil Mickelson, maximum woman wage earner is American tennis player Serena Williams. Yet above all, the very first position is taken by none other than Portuguese striker Christiano Ronaldo, the star of FC Real Madrid.